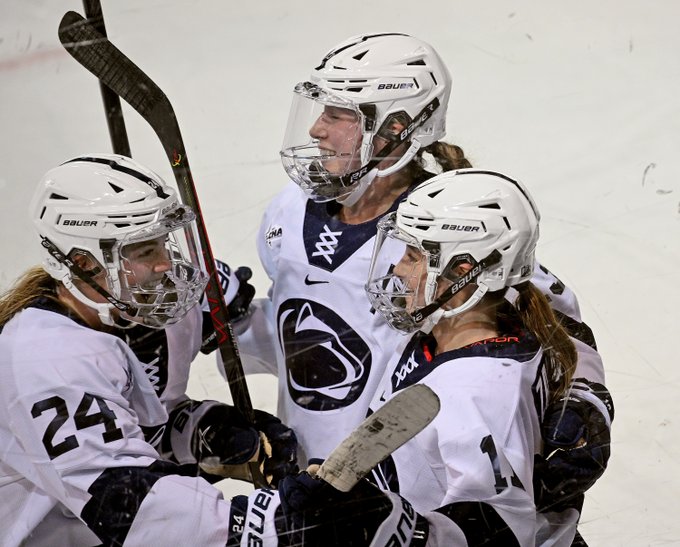 Robert Morris cut their men’s and women’s hockey programs with little notice and many of the women’s team players have signed elsewhere. The Colonials won the CHA conference tournament and advanced to the NCAA Tournament where they lost to Northeastern in the opening round. There is an ongoing fight to reinstate the teams, but I’m not sure that re-receiving the university’s sanctioning would matter for the women’s team. Many of their players have transferred and committed to new teams since the announcement.

This is the 20th year of CHA play. Penn State is the preseason number 1 and is trailed by Syracuse, Mercyhurst, Lindenwood and RIT.

Sierra Burt is a returning fifth year senior that led the team in scoring last season.

Senior goalie Annika Asplundh is the defensive rock the team builds out from.

At 6’0” tall, senior forward Jada Burke is a huge presence up front that has had some big games in her career. Her physicality is quick hands are a huge bonus for the in the faceoff circle.

What To Watch For

The Lions will benefit from more consistent time on the ice together. There are very good players on this roster that have to take another step forward. Asplundh is a solid presence in net, but the defense needs to let fewer shots reach the net and the offense has to average more than a goal or so per game. If Lindenwood can be a bit more aggressive on offense while not giving up too much on the blue line, it should make a big difference for them. It’s coach Shelley Looney’s third season, but the first one where I think we’ll really get to see how her style and influence impact the team.

I have Lindenwood finishing fourth, but think they have a lot of upside and potential.

Fifth year player Kristy Pidgeon joins the Lakers from Clarkson. She brings height and physicality to the offense as well as a wealth of experience.

Sophomore Sarah Boucher led the team in points as a rookie.

Alexa Vasko returns for her bonus year to wear the C for a third year. Her leadership is invaluable to this team.

What To Watch For

Offense. That’s not to say that Mercyhurst doesn’t have a good defense or goaltending, but a quick and talented offensive corps makes the Lakers dangerous.

It would be foolish to ever overlook the history and experience of Mercyhurst and coach Mike Sisti. They’re simply never out of contention. They were picked third in the preseason poll, but the Lakers will push both Syracuse and Penn State for points and position in the standings. They return 19 players to a team that averages about three goals scored per game in recent years. Six different players scored goals in their game against RIT last weekend.

I’m picking them second for now, but would not at all be surprised if they win another league title.

Kiara Zanon was last year’s CHA Rookie and Player of the Year was also picked as the preseason Player of the Year. She led the league – and all NCAA rookies – in scoring last season with 10 goals and 20 assists.

Sophomore goalie Josie Bothun was our Rookie of the Year last season after back-stopping the team to 16 wins, one shy of the program record in a season with far fewer games played. Having her in net gives the Nittany Lions the ability to be more daring on offense.

Penn State made a big push forward last season, but there are questions about how they’ll fare against and in comparison to a full slate of teams. They made each of the pre-season top 10 polls for the first time ever and will be looking to build on the momentum and experience of last season. There is a lot more focus on this squad than ever before and how they handle that is pivotal to how their season turns out. There’s a difference between chasing or being an upstart and holding strong at the top. This is the Nittany Lions’ first time starting the season as conference favorites and nationally ranked.

They were left out of the national tournament last season, which will definitely be a motivator, but they’ll also have to prove that they really do belong. They can quiet doubters early as they start their year with difficult non-conference series with St. Lawrence and Boston College. The results of those games will go a long way in determining where they measure up against the rest of the country. Wins in these games will be very important to their resume when it comes time to talk about the NCAA tournament. Of course, they can just win the conference tournament and take the decision out of any one else’s hands.

In the abbreviated season, they were second in the country in team defense, but their special teams were not where they’ll need to be to pull out close games this year in a tight CHA race.

I have them finishing first, but don’t think it will be easy.

Freshman Sarah Coe split time in the net in RIT’s non-conference game with Mercyhurst last weekend and did very well. The plan may be to continue to split time, but she certainly caught some attention for her first time on the ice.

Sophomore Chloe McNeil is a transfer from Providence that already showed she’ll make an impact in RIT’s first game. She’s not afraid to put the puck on net and brings another option for the Tigers up front.

This is a younger team with a lot of room to grow and plenty of opportunities to surprise people. Offense hasn’t been a strong suit in recent years, but the Tigers already seem more aggressive and willing to put the puck on net. If they improve over the course the year they way it looks like they can, their final regular season weekend against Penn State could be a lot of fun as they look to maybe play spoiler. This feels like a team to keep an eye on.

I have RIT finishing fifth.

Returning fifth year goalie Allison Small is a big win for the Orange. She’s among program leaders in net and is one of the big reasons the team is allowing fewer than two goals per game. The Orange have also added Arielle Desmet from Robert Morris. They’re in a good spot no matter who is in net.

Syracuse is returning its top scorers, but DiGiralamo was second on the team in scoring from the blue line. The Orange need more contributions on offense if they’re going to push Penn State for the top spot. They came back from down 2-0 to tie up their exhibition with RPI last weekend, but couldn’t close out the game. Rookie Sarah Marchand looks like she could be a breakout star this season. The Orange will need immediate contributions.

The Orange have played the role of spoiler recently, but I’d like to see them show a bit more consistency. They have the ability to beat every other team in this league on any given day, but don’t always hit the ice looking like they know that fact.

For now, I have Syracuse third. I think they’ll finish anywhere from 1-3.

ECAC Hockey 2021-22 Season Preview: After many teams miss ’20-21 season, conference ‘starting over and building from the ground up again’