Think about all Chris Kreider has seen this season, and then put the situation the Boston College freshman will be in today in context.

Kreider scored a goal in the gold-medal game, helping the United States win the World Junior Championship, then two days later returned to Boston to play in front of 38,472 at Fenway Park. 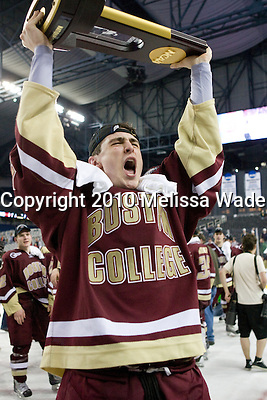 He scored a big goal as BC won the Beanpot with a victory over Boston University in front of 17,565 at TD Garden.

He scored a goal in a national title game witnessed in person by 37,592 at Detroit’s Ford Field, then celebrated with his Eagles teammates as NCAA champions.

Combine the attendance of the two biggest games (76,064), and you still don’t get to the size of the crowd they’re expecting when Kreider and his U.S. teammates open the World Championships on Friday at VELTINS-Arena in Gelsenkirchen, Germany. The crowd is expected to be 76,152 — a world record, at least until the game next season at Michigan Stadium.

That’s a lot of eyes watching you play. At least he should be prepared.