The opponent? Top seed and No. 1 ranked Cornell, which had succeeded in shutting down the potent Boston College offense in the East Regional in Providence little more than a week ago.

UNH’s top scorer? On the shelf, as Lanny Gare, with his team-high 51 points, made an early exit after dislocating his shoulder on his first shift in the Northeast Regional against host BU. New Hampshire went on to win that game 3-0, but Gare would be sidelined for the rest of the season.

Cornell’s goalie? David LeNeveu, a Hobey Baker finalist and owner of a microscopic 1.14 goals against average, a stunning .942 save percentage, and an eye-popping nine shutouts.

History? Last year in this same game, as the Wildcats faced Maine for the right to represent Hockey East in the NCAA championship, UNH players went home embarrassed following a 7-2 mauling by the Black Bears.

A quick start? It went to Cornell, which jumped out to a 7-1 advantage in shots in the game’s opening minutes. 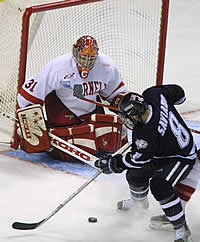 “The first 10 minutes, we weren’t playing our game,” said New Hampshire forward Pat Foley. “Our team plays best when we are on the edge, and that’s where we’ve found success.”

That edge came when a Cornell goal was disallowed upon video review, giving UNH a chance to settle down. Then a Wildcat goal by fourth-liner Tim Horst gave them a lead, and the shots flip-flopped into New Hampshire’s favor by the end of the frame.

The real damage, though, came in the second period. And the name of New Hampshire’s secret weapon was Steve Saviano. Saviano entered the game with a respectable 37 points, but almost all of them — 30 — came from assists.

He had never scored more than one goal in a game, but managed to convert twice on the big stage.

With the second period barely a minute old, Saviano converted a pass from linemate Nathan Martz with a shot over the glove of LeNeveu.

“We knew he was a good goaltender, so we just tried to get the puck on net wherever we could put it,” Saviano said. “Mine just happened to be high.”

Just minutes later with UNH on the power play, Saviano played give-and-go with Martz and fired another high shot over the shoulder of LeNeveu on what would eventually stand as the game-winner.

“Martz did a nice job of drawing the second defenseman off, which game me some time to see what I could do,” Saviano explained. “I usually look for Sean [Collins] first, but he was gone and [Kevin] Truelson was gone, so I was thinking shot the whole time.”

“He had a couple of great opportunities to put the puck away,” said Umile. “He’s done an awful lot for the program, and he’s one of our key players.

“He’s a high-energy player, he makes plays, he kills penalties. I’m happy to see him put in a couple of shots because he’s a terrific player and a terrific guy to coach.”

One can’t spend any time around the New Hampshire program without hearing about last year’s debacle against Maine. Saviano and his teammates turned that into a motivator.

“We’ve been here before,” he said, for the umpteenth time this year. “We came into this game like any other game. Last year I think we got a little too hyped up. We’re more experienced now, and I think we’re better for it. That experience helped us.”

And the same is true of the Gare injury, which might leave other teams just happy to be in the tournament, before bowing out after a respectable fight. Instead, a “no-star” policy made it a challenge for the Wildcats.

“We lost a great player in Lanny Gare, and we knew we had to step up no matter what,” said Saviano. “On the second line, we took that on our shoulders and went out and did it. They were looking to us for offense in this game, and we ended up getting it.

“For me to get two goals is a big plus for our team. We’ve played hard all year, and each game a different player steps up. Tonight was just my time.”

As for Cornell’s No. 1 ranking, the Wildcats saw that as a burden for the Big Red and not a benefit. New Hampshire had been in the same position the previous year.

While power-play conversion rate and penalty-killing efficiency are obviously important to any team, Saviano fingered one of the key psychological aspects of the game: confidence.